Join Queens Libertarians on Saturday, August 14, 2021 at 11:30 a.m. at Takara Sushi restaurant located at 150-11 14th Avenue, Whitestone, New York to discuss “9-11: Twenty Years of Cover-up.” QL Organizer John Clifton (and Lawyer’s Committee for 9/11 Inquiry member Dave Meiswinkle, tentative) hosts a free-wheeling overview of the two decades of controversy, covert ops, and political issues pertaining to the events of September 11, 2001. Some of the most recent research and evidence related to it will be included in this presentation. 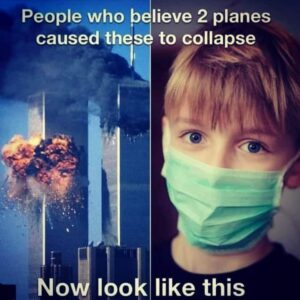 Since circa 2005, as now, Clifton concluded and believes 9-11 was a false flag or “inside job,” conducted by criminal elements of the deep state establishment to steer the US into decades of increased military intervention abroad, and increased surveillance at home. Accordingly, the historical and geo-political legacy of the disaster will be explored, as well as its parallels with how subsequent events, or current domestic policy narratives have been impacted. “Those with libertarian beliefs, who are opposed to the initiation of force and fraud on principle, should be concerned about its use to commit, exploit and cover this up,” Clifton says. Details and Directions.

In related news on the quest of families of the victims to obtain truth and justice for what happened, StationGossip has reported that “family members of the victims of the 9/11 attacks released a statement last week, calling on Biden to declassify certain documents. The families have specifically pushed for documents to be released that pertain to the alleged involvement of Saudi Arabia in the attacks. Family members of victims of the September 11 terrorist attacks said that Biden should not attend memorial events this year unless he releases classified information.

“The group says that as a candidate Biden pledged to be more transparent and release as much information as possible but that his administration has since then ignored their letters and requests,” NBC News reported.

“We cannot in good faith, and with veneration to those lost, sick, and injured, welcome the president to our hallowed grounds until he fulfills his commitment,” they wrote in a statement obtained by the outlet.

“Since the conclusion of the 9/11 Commission in 2004 much investigative evidence has been uncovered implicating Saudi government officials in supporting the attacks,” the statement said. “Through multiple administrations, the Department of Justice and the FBI have actively sought to keep this information secret and prevent the American people from learning the full truth about the 9/11 attacks.”

“Twenty years later, there is simply no reason — unmerited claims of ‘national security’ or otherwise — to keep this information secret,” the group wrote. “But if President Biden reneges on his commitment and sides with the Saudi government, we would be compelled to publicly stand in objection to any participation by his administration in any memorial ceremony of 9/11.”