Dr. Murray Sabrin on How The Political Elite Hijacked The Constitution

Dr. Murray Sabrin on How The Political Elite Hijacked The Constitution

Please join us on Saturday, April 14, 2018 from 11:30 a.m. to 1:30 p.m. to hear Dr. Murray Sabrin (currently the nominee of the New Jersey Libertarian Party for United States Senate) speak on the topic of “How The Political Elites Hijacked The Constitution.” The event will take place at Takara Sushi located at 150-11 14th Avenue, Whitestone, New York. Dr. Sabrin will speak for 45 minutes 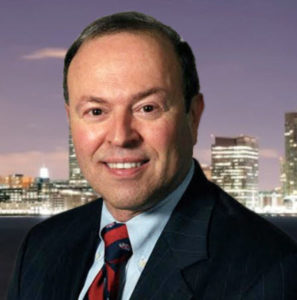 followed by 45 minutes of interactive conversation. Many educated and experienced people are being invited to participate in the discussion.

Dr. Murray Sabrin is Professor of Finance in the Anisfield School of Business at Ramapo College of New Jersey. He has been a member of the faculty since 1985. He has a Ph.D. in economic geography from Rutgers University, an M.A. in social studies education from Lehman College and a B.A. in history, geography and social studies education from Hunter College. Sabrin has worked in commercial real estate sales and marketing, personal portfolio management, and economic research. He is also co-founder and president of Inversquare LLC, manufacturer and distributor of Conger LH™, the world’s first Lubrihibitor.

Sabrin’s articles have appeared in The Record (Hackensack, NJ), The Star Ledger, Trenton Times, the Asbury Park Press, and NJBIZ. His essays have also appeared in Commerce Magazine, Mid-Atlantic Journal of Business, and Privatization Review, and www.lewrockwell.com. He is the author of Tax Free 2000: The Rebirth of American Liberty. Sabrin is a contributing columnist for www.politickernj.com (http://www.politickernj.com/). Sabrin is currently writing Ask Me About My Ponzi Scheme: Deceit and Deception from Woodrow Wilson to Barack Obama.

Sabrin was the Libertarian Party nominee for governor in 1997 and was the first third-party candidate to participate in the official debates with the two major candidates. In 2000 and 2008 he sought the Republican nomination for the U.S. Senate. In 2007 Dr. Sabrin and his wife, Florence made a $250,000 gift to Ramapo College to establish the Sabrin Center for Business Excellence in the Anisfield School of Business.

Dr. Sabrin arrived in America with his parents and older brother on August 6, 1949. His parents were the only members of their respective families to survive the Holocaust. He became a U.S. citizen in 1959 at age 12 and was graduated from the Bronx High School of Science in 1964.

While we will pass the hat, there is no mandatory donation. However, all attendees must purchase $10.00 in food and drink over the two hour period. There is street parking and a reasonably priced parking lot across the street. You can travel there by taking the Q15A bus out of Main Street, Flushing (7 Subway Line) at the Southwest Corner of Prince Street at Roosevelt Avenue (which will let you off on the corner of 150th Street & 14th Avenue) or by taking the Q76 bus from either the 165th Street Bus Terminal or from the subway station at Jamaica Avenue & 179th Street (you should get off at the corner of Cross Island Parkway & 150th Street & walk to 14th Avenue).

NYC Shipping Human Excrement to Small Towns  Next Post :
Previous Post :   Is the National LP Chair a US Spy?