Dr. Phil on Replacing the Progressive Income Tax, The Essay

Dr. Phil on Replacing the Progressive Income Tax, The Essay

For those who missed his presentation at the QL April meeting, Phil Schoenberg has submitted his remarks in essay form, excerpted below. Link to the full article is provided: 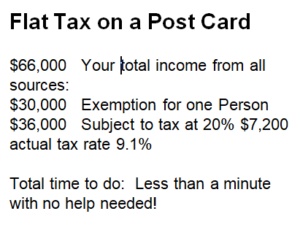 I am here to tell you why the progressive income tax does not work as advertised.  There is no way to make it work because it is a regressive tax riddled with tax loopholes that punishes everyone’s  success. I would like you to stand on one foot, and say after me, “You pay for my benefits.” This is what I had my college students repeat after me as the essence of American government.

Frédéric Bastiat, the French economist, called the idea of progressive taxation “a fatal illusion” in the early nineteenth century. The people in the middle who think they are getting unearned benefits from those above forget the people below are getting unearned benefits from them.  No matter how the progressive income tax is reformed, the people in the upper income brackets find or create loopholes so they will never pay their “fair share.”  They routinely lobby for new loopholes all the time and Congressmen write loopholes to please their campaign contributors. The more things change, the more things remain the same as the French say…