As we enter the last days of the (first?) term of President Donald J Trump, here are diverging perspectives on his era, and the disputed election battle. Below are excerpts from the first paragraphs of essays on the controversial figure. First, from Dr. Philip Schoenberg, on the rise, fall, and legacy of Trump:

Donald Trump has come full circle from whining winner to sore loser, always desiring to be the center of attention, the ultimate narcissist. Trump imagines, lies and mythologizes all the time and will instantly change a lie on a dime. Donald Trump, the master of self-promotion honed his social media and news making skills as the host of The Apprentice, a television show, that he did not create but was perfect for his personality of self-promotion as a celebrity.. He has played by own rules and was not limited by any sense of fair play, honesty, justice, and loyalty…”   Read more 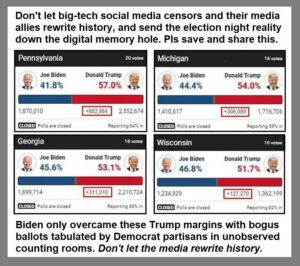 Second, from John Clifton, whose blog predicts “the deplorables” will eventually win:

Set aside ideology, or personal preferences you have about “how a President is supposed to behave” (ahem, as if optics was a high priority consideration of the Founders). A mountain range level of election theft was committed across at least six states in the November 2020 coup disguised as an election. Coupled with the coordination of the tech giants in silencing the sitting President of the United States across all major social media (supposedly) in response to the events in DC on January 6, it represents the single biggest authoritarian power grab in American history…”   Read More

P.S.: Here is a huge list of items comprising the Trump White House’s own assessment of his accomplishments.