From his most recent press release: 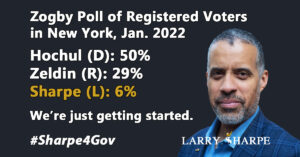 Commissioned by Unite NY on January 22, 2002, John Zogby Strategies conducted a wide-ranging poll of New York State voters’ outlooks on the current political climate of their state, as reported in Forbes Magazine. Larry Sharpe has not officially announced his candidacy. Despite this fact, he garnered 6% sentiment from New Yorkers who indicated they intend to vote for him during this election cycle, in a three-way race against Governor Kathy Hochul, and Congressman Lee Zeldin. This is almost 4 times the percentage of votes Larry Sharpe received in 2018, which could mean over 350,000 votes if the election were held today…(More)

Lessons of the Covid Crisis: Transcript and Discussion  Next Post :
Previous Post :   The Fall of Cortez as Queen of Statism