New Yorkers with Libertarian Party beliefs lament the news (below text from Prison Planet) that NYC is no longer just forcing bad politics on America. Suggestions: legalize weed, take some barren land in the state, bake the waste into fertilizer and grow more hemp. Or, convert it into hydrocarbon fuel via processes like plasma gasification and thermal depolymerization. Either way, cut the crap!

NYC ships the waste by rail to numerous, cheap landfills across the country because apparently the high environmental fees and business costs prevent use of local landfills. 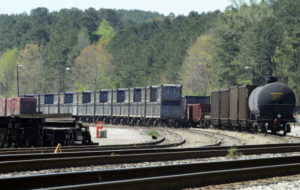 But unfortunately for residents near these landfills, some of which are thousands of miles away, the waste sits on train cars for days before landfill crews can empty them.

“Other towns and cities have been fighting this material in their towns for years,” said Parrish, Ala., Mayor Heather Hall. “While what happened in Parrish was, to our understanding, an unprecedented event, there are still small towns like Parrish fighting this situation on a smaller scale.”

Mayor Hill brought it to public attention after one “poop train” was left near her city for over two months before it was emptied, causing a stench so bad that it forced the railroad to hire more truck drivers to remove the waste.

The story is a microcosm of how large, liberal cities are so badly managed that they pass on their problems – and often their residents – to rural America.

Case in point, the cost of living is so high in San Francisco now that residents are fleeing to Tennessee of all places.

Even entire Bay Area companies are moving to Nashville because the cost of doing business is so much lower in a red state.