QL member and alumni Alton Yee has commented (in letters to the Editor, and to the Jorgensen campaign) on the strange numerical issues of the 2020 election as it bears on LP candidate Dr. Jo Jorgensen’s national totals. It appears she was “Dominioned” out of 11 million votes!  It also seems that there are not enough votes available to realistically account for the 81+ million ballots for Biden:

…I was heartened to see that Dr. Jorgensen had won 1,740,796 votes, or 1.2 percent of the total votes cast, which was “more votes, and a higher percentage of the vote, than all twelve presidential campaigns in the party’s history, except one.” I found it concerning, however, after I calculated the total votes cast in the 2020 Election based on the 1.2% of the votes she received.

Now, mind you, when we add the 74 million votes DJT received plus the 82 million miraculous, _Guinness World Records_ – certifiable votes Biden received, we get a total of 156,000,000 votes ± 1 million votes. It seems to me that Dr. Jorgensen might have been swindled out of 11,000,000 votes. What other reason can you think of to explain the discrepancy?

Thank you for your attention. Regards, Alton Yee

The funny numbers correspond to some of the election number crunching that was separately done by Deroy Murdock, in chart below: 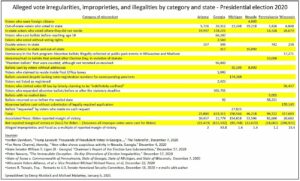 Alton has also sent letters to editors, such as this one to the National Review, whose subject line is: The Federal Government Provides Irrefutable Evidence of Voter Fraud.

…The Federal Government’s irrefutable evidence of voter fraud can be found in the Federal Register, which is “The Daily Journal of the United States Government,” and it’s published by the National Archives and Records Administration.

According to the Federal Register’s “Estimates of the Voting Age Population for 2019,” the voting age (18 and over) population estimates as of July 1, 2019, for each state and the District of Columbia totaled 255,200,373. While the total for 2020 was not available, the 2019 total is a good enough benchmark to stand in for the total in the 2020 election, which is the subject of this discussion.

So, let’s suppose that everyone in this population can legally vote in the 2020 election. But to actually vote, they must register with their State or local election boards. Suppose that 60% of this population had registered. Of course, not every registered voter will vote. So, how many will actually turn out to vote? According to the Washington Post, “The 2020 turnout [of voters] is the highest in over a century,” with a total turnout of 66.3%, which is “[a]s a share of the voting-eligible population,” i.e., registered voters.

OK, let’s suppose that 90% of the total voting population had registered to vote. Thus:

You are welcome to calculate the numbers for 100% of the total voting population, with a presumption that 100% can legally vote.

But, whichever, here is irrefutable evidence of voter and election fraud that’s provided by an unimpeachable source. Namely, the Federal Government’s Federal Register, which is published by the National Archives and Records Administration.

That’s all for now.

Thank you for your attention.